My friend Kristy introduced me to the song Yo voy gana’o by Systema Solar.  It is SO catchy! I have some fishermen in my level 2 group and it is SO close to the end of the year that they’re ready for FUN acquisition.

We started with the video and the full song lyrics.  After we had seen it once, we did the reading about the Chinchorreros of Taganga. On the sheet Kristy made, I had them make little images that summarized the main point of each paragraph.  We have iPads so it was fun to see the emojis they chose!

Today, we did the fill in of the song and we did a story about some fisherman! I don’t know how you like to do your storytelling but I like for my 3 level 2 classes to be in the same ball park with their stories! It makes it so much easier for me to remember the next day! So the first class set the basic main events and then I baited the other two groups into choosing the same events. 🙂

Our first fisherman didn’t fish with a pole or a net (I love that we’re getting the word net because next year in our plastic ocean unit, they’ll it when they talk about entanglement). The fisherman used his hands to fish!  Unfortunately there was a shark in the water and he was eaten.

The second fisherman thought he was a polar bear and fished with his mouth not a pole or a net.  Unfortunately, although he went to get revenge, he was eaten as well.

Suddenly, a giant bird attacked the shark who (Martina Bex, in your honor) got scared and pooped and that let the two other fishermen escape.  🙂 . It was disgusting but we got past tense reps of our new structures AND of flew, caught, saw, opened, escaped, disappeared… There’s so much grammatical gold in a story! And they just thought it was hilarious. 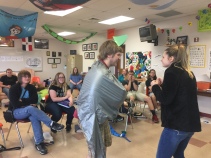 Posts that are so 20 minutes ago..

Unauthorized use and/or duplication of any material without express and written consent from Carrie Toth is strictly prohibited. Excerpts and links may be used, provided that full and clear credit is given to Carrie Toth/ somewheretoshare with appropriate and specific attribution and links to the original content. Contact senoraCMT@gmail.com to request permission to use, duplicate, and/or distribute any content from somewheretoshare.